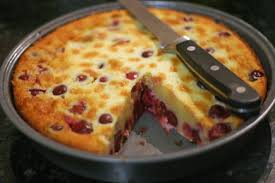 I saw a production of God of Carnage last weekend. I had vague recollections of the play from the Tony Awards (it was one of James Gandolfini’s last stage roles) but I didn’t know much about the plot or that it was a French play that was translated to English for its Broadway run and subsequent North American performances. The original play is set in Paris, but the translation relocates the setting to New York and includes a few other cultural changes. One French reference that was not changed in the production was a clafoutis eaten by the two married couples; it inspires a conversation in which clafoutis recipes are compared. The term for a fruit-filled French cake was new to me, and while I can imagine that many New Yorkers bake and enjoy it, a translation to “cobbler” or something more American would have made more sense in context. Is this dessert more common in the States than I realize?

When I added this phrase to Default, I thought the the letters looked good for the second row in a stack and I decided to use it as a Washington Post seed. The entry didn’t work out very well, though it led to a fill I liked in the opposite corner, so I kept the corner I liked and deleted the seed corner. When I retried the entry in an Unthemely, I had better luck using it in a stack in the bottom of the grid than the top. The fact that I stopped correcting Default fill scores at the tens becomes evident when I use an 11-letter seed for a themeless stack.

The center for the St. Louis Blues got some coverage last weekend due to his shootout prowess in a hockey prelim against Russia in Sochi. He has a good crosswordese surname, and, with his initials, he could appear in a cryptic crossword with a clue involving a “kid breaking tie.”