So they made an arrest in connection to the acts of vandalism perpetrated around Washington, D.C. If the arrest sticks, I can imagine the suspect proclaiming a motive: to make GREENPAINT a legitimate crossword entry. 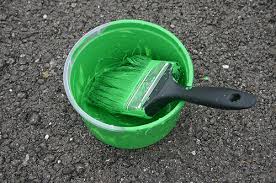 I assume the most common image that people associate with this entry is widely-cut potatoes that are fried and served with a steak, or possibly some other other meat entree. STEAKFRY, also scored at 80, could be the singular of the potato side dish, but would more likely be clued as a party where fried steaks are the main course, analogous to FISHFRY. That sense of STEAKFRY is probably archaic (I know about it from old movies) but an inferable clue option.

The English language, evidenced by entries in Default, has an inordinate number of words that mean “containing sulfur” or “treat with sulfur.” The list is compounded by added variants with the chiefly British “sulphur” spelling. SULPHURIZE, with a British-spelled root and American-spelled suffix, is a bizarre hybrid that is sanctioned by a handful of dictionaries. Is it, perhaps, a spelling that a Canadian chemist might use? In any case, I tended to give most of the verb and adjective formations of the sixteenth element low fill scores.

It’s fun to come across a new word and discover that it’s been something you’ve been doing for years. Just last week I went to the Elitch Gardens water park with my sister and nephew. While floating down the lazy river, I tended to rotate the less-tanned palm side of my forearms to the sun. The next time I visit the water park, I should tell a life guard that I spotted someone supinating next to the wave pool.

I’m becoming more generous when assigning fill scores to entries that may not pass the breakfast test. That generosity stems from the experience of working with editors and the realization that all editors have predilections and banes that constructors must learn. ETUI is an entry that one editor hates and another has no problem with. A constructor who doesn’t want to remove ETUI from a word list altogether develop the skills of selective filling, and if a constructor can do that with ETUI, then why not FART or PORN or BULLSHIT. Mind you, I don’t go out of my way to crude vocabulary in a crossword even when I have the luxury to do so, but in terms of fill scores I’d rather reward an entry with cultural vitality (EARGASM) than one that’s dull, archaic, and obscure.

Both of these entries showed up in recent puzzles. I may need to investigate more *DEGREE entries for a theme notepad. Coincidentally, a coworker and I were discussing a recent code of conduct assessment test that we took. We both missed a question or two, but as she pointed out, CS GET DEGREES. I added that to Notepad for my next set of New Additions. The partial CSGET was not added.

Since I added ICYSTARE to Default, I figured I should give the same courtesy to something less threatening.

I’m not a Twitter user, but heard this website mentioned in a recent television interview. The website name was used as a verb. Even with Google checks, I’m not sure I want to add the verb forms TWITPICKED, TWITPICKING, etc. to Default. Can anyone verify if these are good entries?

This type of specialty meal came to my attention during an episode of ABC’s Whodunnit? After a quick Google check, I added the entry to Default and fast-tracked it as an Unthemely seed. Whodunnit? by the way is a great summer reality series. It features just enough game cred to keep it legit, but still delights in the most absurd murder-mystery plotting handled my an obligingly dramatic cast of contestants. I’m disappointed that the selected murderer, pretending to be a contestant, is apparently being given no information about the weekly murders at all (a departure from the similar reality series The Mole). This aspect dulls the armchair sleuthing, but the series remains silly, summertime fun.

I received a compliment on Unthemely #38 related to the fill and the intersection of the long entries. That 12-13-12-intersecting-stack themeless pattern is one of my favorites. It’s a great way to use 12- and 13-letter seeds, which can be difficult to place in many themeless grid patterns. Also, the grid autofills amazingly well for a 66-worder. I associate the grid with Peter Gordon; I don’t think of it as a popular themeless option, but I have notable holes in my solving regimen (e.g. New York Times). Do you see the 12-13-12 grid more often than I do?

The entry SLAVE and phrases that contain SLAVE make me uncomfortable. Appropriate clue options can generally be found, but I’m not as apt to give these phases fill scores comparable to other multi-word phrases. I’ll share an embarrassing personal story associated with the word: My company used to organize annual programs to celebrate Martin Luther King Jr.’s birthday. The programs would typically included a guest speaker, a luncheon and a rendition of the African-American national anthem “Lift Every Voice and Sing.” While glancing at the song sheet handed out for the attendees at one of these programs, I noticed that the initial letters of the title could be anagrammed to form the word SLAVE, and to this day that anagram remains etched in my mind as an inappropriate but effective mnemonic device for remembering the title.

This entry makes me smile. Ginsberg confirms that it appeared in the New York Times, so it ended up in Default through CRUCIVERB. The entry, from a Joe DiPietro 2000 Sunday puzzle, is something of a retronym that implies the popularity and prevalence of group puzzle solving. Intimate cosolving of newspaper crosswords is a time-honored tradition, though I tend to think of group solving in contemporary contexts such as extravaganzas or the pairs division at the Lollapuzzoola tournament. The phrase SOLOSOLVER is also a nice repeated trigram deletion base.

If this entry could be clued as the Irish playwright, who is generally referenced as SAMUELBECKETT, I would give it a slightly higher score. As it is, the entry refers to Scott Bakula’s character on Quantum Leap. I haven’t watched that show in years, but it was a nightly ritual when it aired in reruns on USA Network in the ’90s. Quantum Leap’s ten o’clock broadcast was followed by an airing of Magnum P.I., which my housemate Ralph loathed. As soon as the helicopter appeared accompanied by the electric guitar riff, he would see who was closer to the remote; if it was me, he would fake a seizure until I changed the channel.

My first crossword puzzle in the New York Times ran in 2000. The theme involved words and phrases containing the consecutive letters OREO, and I beleive the puzzle was the first published puzzle I created with CCWIN. My first draft of the puzzle contained the entry SETSTOREON, but Will asked me to change it because he didn’t feel the phrase was common enough. I just checked Default and discovered that SETSTOREON is not in the list. I’m not sure where I found the phrase while constructing the puzzle in 2000; electronic word-finding resources were less prevalent then. I wonder if it appeared in the original Default, but I deleted it after Will requested a revision.